Olivier van Meer: “How a boat is used is crucial”

Wadden boat with the feeling of a boy’s dream

This summer, a special yacht will come into service: Wadden boat ‘IJver’. Yacht designer Olivier van Meer flawlessly sensed what his client had in mind and got the possibility to be creative. “This client told me in a few sentences why he wants something. But the importance is to hear what he is saying. Because of my own childhood experiences, I completely understood what he meant.”

“Look at this”, Van Meer says, while he is pointing at the hull, “do you see how beautifully those welds are made? Real craftsmanship!” We are at the VMG boatyard in Enkhuizen, standing next to one of his designs under construction, called IJver. Van Meer continues: “Although the client wanted a new yacht, he did not want shiny finery. It had to be naval and the construction could be visible. No filler was used to finish and the welds were not ground. The base had to be tight all at once. I did have to use some persuasion to convince the welders of SDH of this approach. After all, welders are used to grinding and filling. Once they were persuaded, they did everything in their power to deliver a super tight hull. And they succeeded. They are real professionals.”

PORTHOLE
It is just one of the special details of this new design. There are many more to be appointed, but first of all we go back to Van Meer’s childhood. He was born on the 22-meter wooden schooner of his parents, and grew up on that yacht as well. Lying in his cage, he had direct contact with the aqueous outside world through the opening porthole. It is an experience that you only learn to appreciate at a later age. That boat feeling still comes in handy in his work as a yacht designer. It also played a role in the realization of this new design.

SHORT CONVERSATION
Customer contact sometimes arises all of a sudden. Van Meer knew his client – let’s call him Harry for privacy reasons – from an earlier restoration job. Van Meer: “I had to transfer at Barcelona airport when I ran into Harry. He was travelling in the opposite direction; we were both in a hurry. Nevertheless, we started a short conversation and Harry immediately got to the core: “Olivier”, he said, “I want a yacht to explore shallow waters and dry up on the mudflats (Wadden), together with my children and grandchildren. Oh, and I also want to be able to sail it to Berlin.” I replied that I would search a yacht for him, and he was gone. The conversation had been less than two minutes. But I exactly understood the atmosphere he was looking for; the childhood dream of the past. That is actually the base of what I do now.

NEW CONSTRUCTION
Once back in the Netherlands, Van Meer decided to look for a used former Wadden or IJsselmeer cutter, planning to convert it. To his surprise he did not find many, and not one that was suitable. When he told Harry the disappointing news, Harry decided that this meant a new yacht should be built…

Of course he made demands. He wanted a comfortable family ship of up to 15 meters, with the possibility of drying up upright and lots of outdoor experience. A naval look and especially not too wide. No shiny appearance, but high-quality materials. He also came up with the idea of a hold with box beds. Van Meer: “Our conversation was not so much about yacht building, but about the atmosphere he had in mind. I was given the freedom to incorporate that experience into the design. It expressed confidence and it was extra motivational for me. I worked out the preliminary design to perfection and carefully presented it. Harry was very satisfied and thought I had understood him perfectly. I had never experienced that in my 30-year design career; that I felt so closely what a customer wanted. Most people cannot express why they like something. This client can, within a few sentences. But the importance is to hear what he is saying. Because of my own childhood experiences, I completely understood what he meant. It is all about how a boat is used and how the passengers feel on the boat. That is crucial. Why people like being on board is all in the details. As a designer, you have to exploit those details. Getting under a client’s skin, that is the essence of my profession as a designer.

NOTHING STANDARD
However, it turned out to be no easy task. Van Meer: “A design like this did not exist at all. Nothing is standard. So I had to sort out, measure and calculate a lot.” Within all requirements, Van Meer designed a cross between a cutter and a luxury motor yacht. The design is in aluminum. This is not a choice made due to weight savings, but with regard to offshore use. After all, aluminum is much more resistant to salt and sand than steel. The yacht is low maintenance, no wood was processed on deck. A 40 mm heavy keel, solid sidewalls, sturdy bilge keels and 8 mm thick bottom plates give the yacht the possibility to fall dry, even on a hard bottom. The yacht will have a real hatch cover, albeit of a light construction with aluminum and composite. They are locked sea-tight with rubber “Jeep closures”. Without too much effort, a large part of the hold can be opened up, to enable guest to sleep under the stars.

BOX BEDS
The layout of the hold is remarkable: no separate cabins, but a large space with a folding table, sliding long benches, plenty of storage space and longitudinal cages against the boat’s wall, each of which can be shielded to be used as a kind of box bed. A special detail is the porthole at every pillow, providing a view over the water to everyone. Indeed, the childhood experience as a starting point. Against the tail-board is an oil heater, around which chairs can be arranged. On the starboard side is the galley, and on the portside are the stairs to the wheelhouse. There is also a large wet storage cabinet, which is dried using heat from the 8kW Victron charger / inverter. At the front of the hold you find a separate toilet on the port side and the shower opposite of it. Stylishly executed with high-end materials, but in such a way that makes them easy to clean. Next to it is the owner’s cabin, with a double bed and one extra bed for a grandchild. This is the only space on board with air conditioning. In front of the bulkhead is a deep forepeak with self-draining anchor box, storage and a SidePower bow thruster. This is where you find an extra seat on deck. On the front, fixed part of the roof, there is a sturdy mast foot. A folding mast will be placed on the yacht for a support sail and to hoist the dinghy. When the shutters are open, the holes are shielded with an inner railing.

REACHABLE TECHNIQUE
The technical installation work was performed by Cornelis Jongkind and Brovo-Scheepsbouw. The stern is below deck reserved for all technology. In the engine compartment under the wheelhouse, you find a Volvo Penta D4 four-cylinder diesel of 180 hp / 132kW, 2,800 rpm, with hydraulic reverse gear and a closed cooling system. Given the exploring on shallow waters, Van Meer wanted to avoid any hassle with weed filters. Part of the cooling system is hidden in the bilge keels. The generator is a four-cylinder Kohler of 7kW, 1500 rpm. A special feature is the presence of a Seakeeper gyro stabilizer. Van Meer: “It is a flat bottom, so it wants to move in the waves and on strong winds. In order to keep things comfortable for the passengers, some sort of damping of the yacht’s movements is desired. However, I did not want protruding parts under water. That’s why I opted for a gyro stabilizer.”

In the designer’s philosophy, all technique must be easily accessible. That is why there are no fewer than six access hatches in the floors. The technical room is quite full, but there is still space reserved for Enteron’s sewage treatment system, which purifies wastewater in a non-chemical way. Van Meer: “A smaller version of this will come on the market and it will be installed later.” The IJver harbors another surprise in the rear end: an aluminum lazy staircase folds out, which enables the passengers to easily get on and off the boat once it has dried up. Besides, both sides of the boat have recessed stair steps in the hull.

De IJver is a hundred percent Dutch product, with a Dutch designer, Dutch hull builder and a Dutch finishing yard. The IJver enriches the Dutch recreational fleet no matter what. 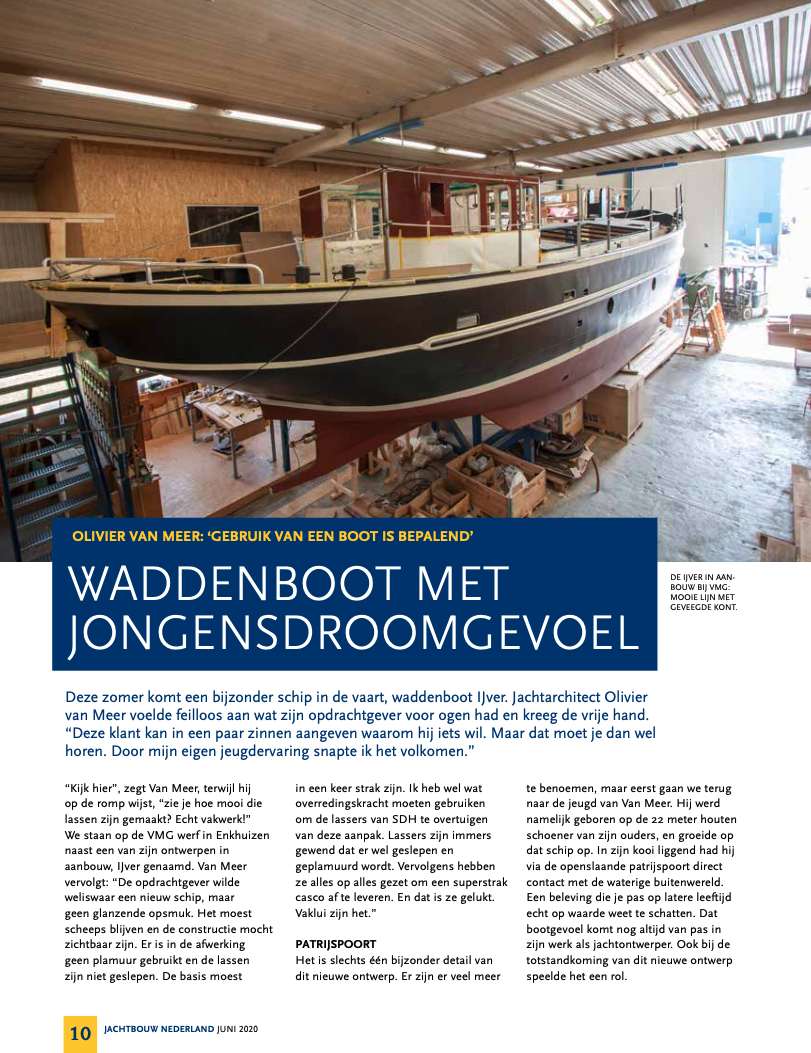 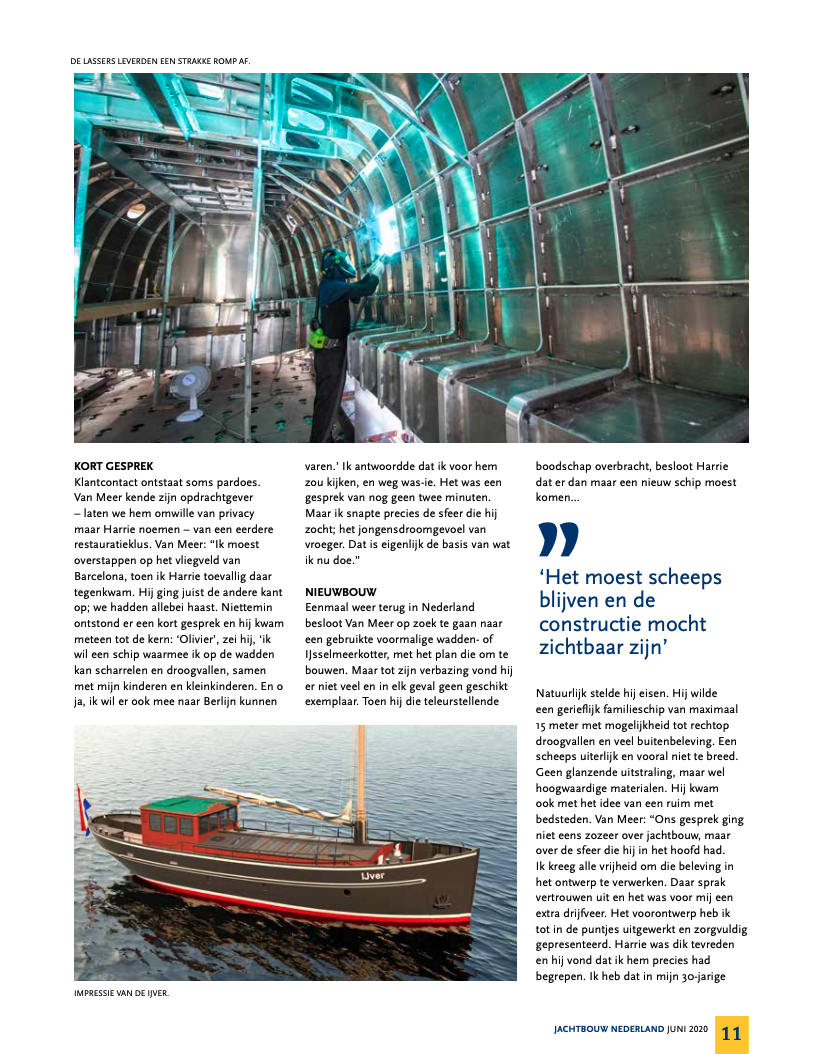 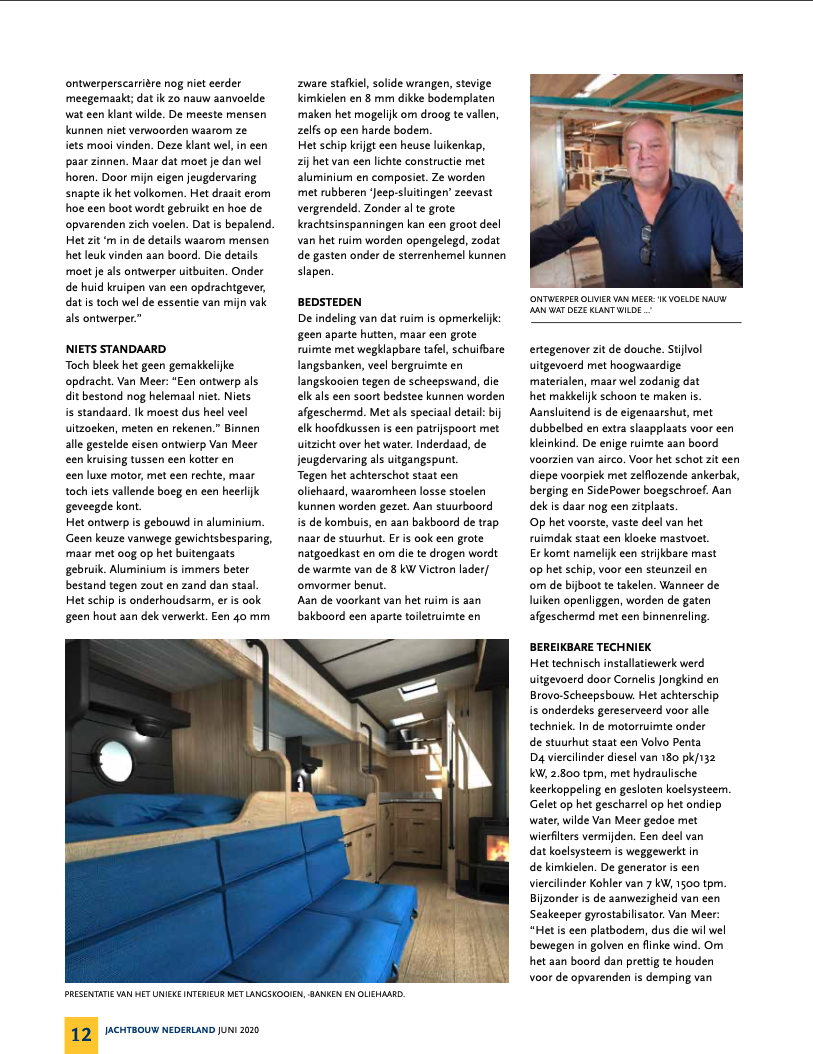 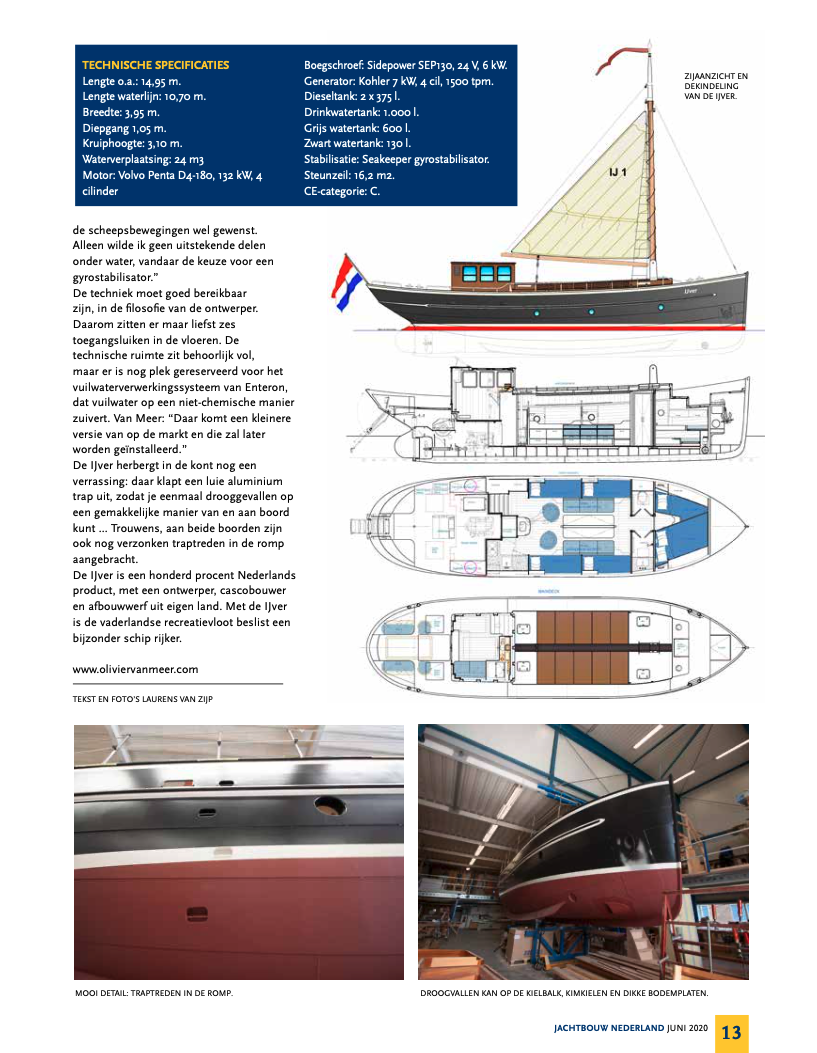 Looking for a service partner?